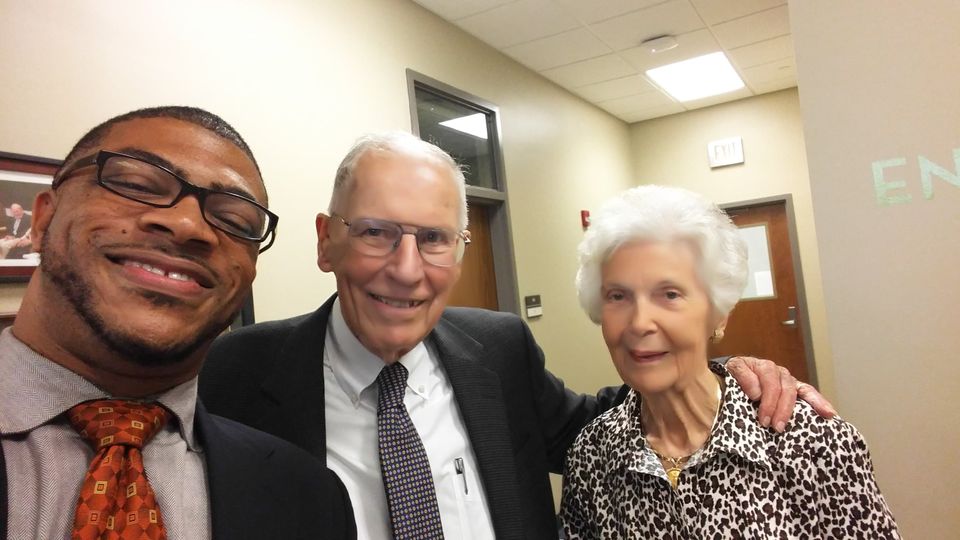 Governor William Winter would always greet me with, “Hello, my friend,” and he would shake my hand and pull me in for a hug when he was able. As a nineteen-year-old, I didn’t understand that that was significant for a man of his generation, but it was. It was warm, like a favorite uncle or someone who saw great value in you. I had not experienced that kind of affirmation much from older white men. He made me feel like a friend, a solid friend.

Over the early years, Gov. would write me letters or short notes or call me from time to time. We would have lunch on occasion, often at his request, and a few times, we watched games together. I was deeply impressed by him, admired him, and was proud of our friendship before I understood who he was in the history of my home state or the nation.

I used to listen to him talk about the days of segregation, his childhood, and his public life. At times I think I heard with skepticism of the great grandmother who helped raise me. She was born around 1904; in the beginning, that felt necessary and safe for me. I was raised where the Southern Railway crossed the Yazoo Delta/Yellow Dog Railroad in Moorhead, MS, and he seemed even more proud of that than me. He was earnest, seldom spoke about history with too much nostalgia, and at times expressed regret; I appreciated all of that. He became one of my most precious friends, perhaps because few of my other friends had friends like him.

Many of my friends, mentors, and many of my heroes held him in the highest regard. He was an ally, a leader, a statesman, and even an example or model for them. I don’t think he fully understood his personal impact on people, but as we got older, I was proud to share his impact on me with him. His name means a lot to me. For about ten years, I have been blessed to do meaningful work in an organization bearing his name, honorable and gifted people with an incredible diversity of lived experiences.

At the Winter Institute for Racial Reconciliation, we’ve always prided ourselves on taking the values we shared with him everywhere we went. From the moment we arrived, whether in-person or on-screen, we worked to extend the dignity and respect to others that he extended to each of us. Outside of sports, especially games with crappy officiating, I never heard him say a degrading thing about anyone, and if I choose to do so, the best I’d get from him was a “perhaps, I can see that,” and we’d move on.

As the new Executive Director of that organization and in agreement with the Winter family, his children, and their children, we have adopted a new name for that organization. It began as the University of Mississippi Institute for Racial Reconciliation and Civic Renewal. I was the lone student and the youngest founding board member when it was created. Judge Rueben Anderson, Judge Constance Slaughter-Harvey, Mayor Robert Walker, Judge Charles Pickering, Dr. Andy Mullins, Dr. Gloria Kellum, Chancellor Khayat, Dr. Charles Payne, John Geary, Rev. Wadlington, Dr. Charles Wilson, Professor Jan Murray, Traci Mitchell, and Judge Mike Mills, Mr. J.L. Holloway, and my professor, Dr. Charles Eagles were all in that space and in different ways their stories and experiences are with me today. Governor and Dr. Susan Glisson became members of my tribe, and we cared for each other.

The William Winter Institute for Racial Reconciliation is now the Alluvial Collective. Our team is proud of that name because it captures what we have always worked to be, a space where simple seeds of hope and expectation can fall into fertile ground, take root, and be the kind of change that leads to better. Our work is not changing.

The alluvial soil is the most fertile, made so by generations of deposits of richness. We are a collective because our organization has always been meant for people to come and find common purpose, dignity, respect, and possibility.

This has been fun for me to write. I am humbled to count myself in the number of young people Governor Winter invested in and empowered. I think that investment is one of the most critical tests of leaders. This test reminds me of two things. One, Sweet Honey and The Rock’s Ella’s Song, which captures the words and spirit of Ella Baker’s philosophy on leadership, makes me think of leaders like him.

They sing, “The older I get, the better I know that the secret of my going on is when the reins are in the hands of the young, who dare to run against the storm.” Governor intuitively understood that, and his deflection of ambition often showed that. Two, the now-famous homily of Rev. Rob Lowry after the Governor’s passing in 2020. Rev. Lowry says, “…rest well, my friend. We will take it from here.”

Indeed, we will take it from here.

Statement on the Raising of the New Mississippi Flag

Our Statement on Justice for Black Lives