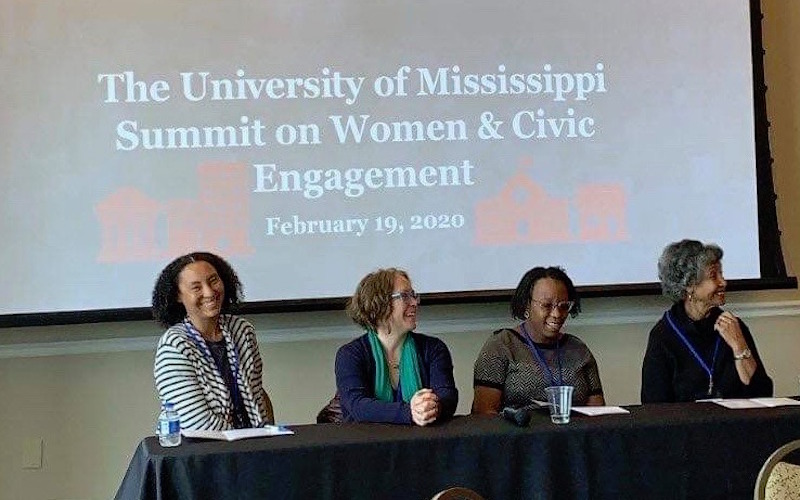 To celebrate Women’s History Month, the William Winter Institute is working with other organizations to commemorate the 100 years of women’s sufferage and to lift up women and organizations who continue to do important work.

March is Women’s History Month, and this year marks a particularly important milestone: the 100th anniversary of the ratification of the 19th Amendment, which granted women the right to vote. We are working in tandem with other groups in Mississippi to commemorate the anniversary this year while staying mindful of the remaining barriers that kept many women from exercising their full democratic rights, then and now.

Congress approved the 19th Amendment in June 1919, and it was submitted to the states for ratification. Tennessee became the 36th state to adopt the amendment in August 1920, enshrining it in the Constitution.

Women’s suffrage is often remembered as part of the same historical arc as voting rights for African Americans, but the two causes often found themselves at odds. Women’s suffragists were active in the abolition movement, but they splintered on the issue of the 15th Amendment, which enfranchised black men but excluded women of all races. Here in Mississippi, the white men who wrote the state’s 1890 Constitution tried to exploit the division. They debated whether to grant voting rights to white women as a means of further suppressing black political power. It failed in committee by a single vote.

The margin was more lopsided when the state House of Representatives took up the 19th Amendment in March 1920. They rejected women’s suffrage 106 to 25. It was not called up for another vote until March 22, 1984, after it had been approved by every other state in the country. This time it passed unanimously, putting Mississippi on the right side of history, albeit 64 years late.

For black women like Fannie Lou Hamer, who was jailed and beaten for attempting to register to vote, the 19th Amendment had little effect until the Voting Rights Act of 1965. Nationally, only 25 percent of black women gained access to the ballot after 1920, and virtually none in Mississippi. Another March anniversary — the beating of civil rights marchers in Selma, Alabama, on Bloody Sunday, March 7, 1965 — reminds us of the price that was paid to fulfill the Constitution’s promises.

Unfortunately, women’s access to the ballot box has not guaranteed access to the halls of power. Women make up 52 percent of Mississippi’s population but only 14 percent of its lawmakers, the least of any state legislature in the country. Mississippi also happens to be the only state without an equal pay law on its books. Mississippi’s women are disproportionately burdened by inadequate child care and family leave policies, and the state’s maternal mortality rates are among the highest in the developed world.

Despite these challenges, we are encouraged at the work taking place in the state to empower women in their communities and the Capitol. On February 19, our Director of Community and Capacity Building April Grayson participated in the University of Mississippi Summit on Women and Civic Engagement, which brought together an impressive group of women to discuss activism taking place on the local and state level.

April, along with team members Jackie Byrd Martin and Jake McGraw, also recently had the privilege of working with the inaugural Women’s Policy Institute, a fellowship organized by the Women’s Foundation of Mississippi to equip women from across the state with tools to advocate for state-level policy changes to improve women’s health and economic security.

This Women’s History Month, please join us in reflecting upon the progress women have made in the past century, and in lifting up the women who are leading the work that remains to be done.

Statement from The Winter Institute on the Derek Chauvin Verdict

Reflections on the 2020 National Day of Racial Healing